This year I’m looking forward to talking about Margaret Damer Dawson, Britain’s first policewoman, born in Hove in 1863. I first came across her while doing some work in the Old Police Cells Museum in Brighton Town Hall (if you like the kind of tiny museums with jumbles of stuff everywhere run by enthusiasts who’ll talk to you for ages and maybe lock you in a cell if you ask them kindly, you need to go here). Margaret was already a high achiever before the forces of law and order called. She studied at the London School of Music, was a doughty mountaineer and was known for campaigning for animal rights and the anti-vivisection movement (apparently loudly and in a large hat) It seems, she started to think that having female police officers might be a good idea while volunteering at the outbreak of WW1 to meet and greet fleeing Belgian refugees arriving in London and seeing how vulnerable lone women were to the sex trade. She saw her chance when a call went out for volunteers to fill the gaps left by men going to the Front. The last thing anyone expected was for women to apply. Wouldn’t the sight of women running around the mean streets of London after criminals be a laughing stock?  Who was going to keep order in their kitchens?  And wouldn’t they trip over their petticoats?  Margaret joined forces with militant suffragette and journalist Nina Boyle to encourage women to apply nevertheless. The new Women Police Volunteers, soon to become the Women’s Police Service, was born and they were anything but a laughing stock. Many of the first ‘lady policemen’ (feel free to enjoy a fingers down throat moment here) were militant suffragettes who had had plenty of experience of policing already, albeit from the other side, having been arrested and imprisoned for disturbing the peace. Equality was still years away, though. The WPS had no powers of arrest, being deployed more in assisting with children being taken into care, giving a stern talking to women ‘in moral danger’ and educating women in giving evidence in court. They might not have had truncheons but they made the most, apparently, of rolled up umbrellas which they used to move on any disturbers of the peace or just to prod general miscreants. As Commandant, Margaret designed the uniforms herself (note – no flailing petticoat in sight.) After Nina Boyle left due to an ideological disagreement about being asked to police curfews for women, Mary Allen, who had previously been imprisoned for lobbing a brick through a Home Office window became Margaret’s right-hand woman. When the war ended it was expected that the WPS now numbering 357, would ‘go back to their washtubs’ as one male officer said. In 1916 the Daily Express had asked a Scotland Yard official whether women would ever be employed as police constables and had given a resounding no. ‘Not even if the war lasts fifty years.’ Luckily neither of these things happened. Margaret was given an OBE for her work during the war and there is now a blue plaque on her house in Cheyne Row, London. 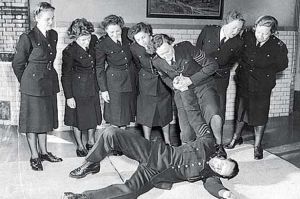 Is this the man who said the ‘lady policemen’ could now go back to their washtubs?