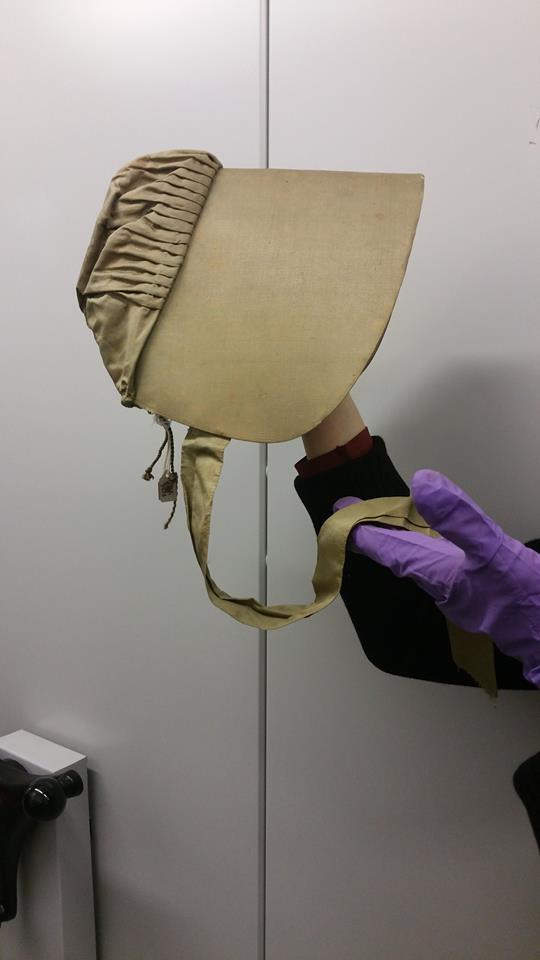 There’s a great event at the Royal Pavilion, Brighton, tomorrow!

‘Jane Austen: Curator’s Talk: Georgian and Regency Costume’ will see Martin Pel, Brighton Museum’s Costume and Textiles Curator and Dr Alexandra Loske, Curator of the exhibition ‘Jane Austen by the Sea’,  discuss the costume on display at the exhibition and show related costumes and works of art not usually on display.  Dr Loske promises ‘bonnets and more!’

This interesting little exhibition on the first floor of the Royal Pavilion explores Jane Austen’s relationship to the seaside both in her works and life.  Brighton itself is almost a character in ‘Pride and Prejudice’, of course, vividly described as the fashionable and rakish resort full of soldiers and fashionable ladies, a fitting place for Lydia Bennet to run away to.  Fans will also recall an action-packed visit to Lyme Regis in ‘Persuasion’.

Objects on display include George IV’s personal copy of ‘Emma’.  (He was a fan of her work.  She, unfortunately, didn’t return the compliment, disapproving of his treatment of his wife, Caroline of Brunswick.)  There’s also the manuscript of Jane Austen’s unfinished novel, ‘Sanditon’, set in a fictional seaside town.

If you think Jane Austen had a low opinion of Brighton, the exhibition invites you to think again in the light of a long misunderstanding arising from a handwritten letter of 8 January 1799.  Curator Dr Alexandra Loske said: “For many years, Austen has been quoted as having written: ‘I assure you that I dread the idea of going to Brighton as much as you can do..’, but her sentence actually referred to Bookham, a village in Surrey, rather than Brighton.  We now know that Austen may not have felt as negatively about the town as has been thought.”

More information about the exhibition and related events can be found here:http://brightonmuseums.org.uk/royalpavilion/whattosee/jane-austen-by-the-sea/

Thanks to Dr Alexandra Loske for the images. 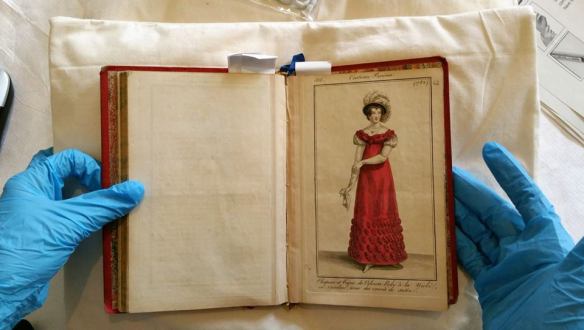 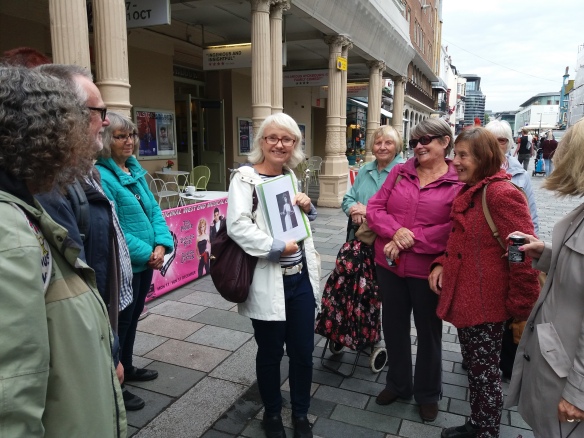 Here I am talking corsets on my Notorious Women of Brighton Tour this morning.

I’m really happy to have been invited to do a handful of women’s history related tours and talks again for the Brighton Older People’s Festival again.  This year it runs from today for two weeks until Sunday 8th October and has plenty of events and activities for those in the 50+ age bracket.  I’m going to be doing a Notorious Women of Hove tour, looking at some of the fantastic women who’ve lived and worked in Hove (meet at 11 outside the café in St Ann’s Well Gardens) on Friday 29th September, and also a Notorious Women of Kemptown gentle stroll on Monday 2nd Oct (meet at 11 outside St George’s Church).

I’m also doing a couple of seated lectures this year.  The first one’s tomorrow at 2 in the café at the Duke of York’s Cinema and is a seated version of my Notorious Women walks, looking at women who’ve created waves in Brighton and Hove’s history over the years.  The second one, ‘Women Warriors’ is on Tuesday 4th October at 2 in the same place.  In this one I’ll be telling the incredible stories of some of the women who dressed as men to serve in the armed forces in the eighteenth and nineteenth centuries, starting, of course, with Brighton’s very own Phoebe Hessel.

The geography of resistance, both past and present, in the British Isles (formerly Turbulent London)