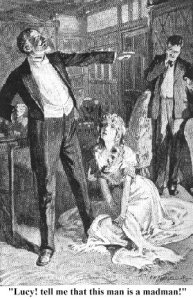 During my walking tours last year I was often asked ‘who’s your favourite Notorious Woman?’  Easy question.  Mary Elizabeth Braddon.  Sometime actress turned novelist, Braddon (1835 – 1915), who once lodged in Brighton’s New Road with her mother, managed to write over 80 novels in her lifetime, including the spectacular ‘Lady Audley’s Secret’, which rocked Victorian readers with its disturbing portrayal of a ruthlessly ambitious woman who will stop at nothing – bigamy, deserting her child, pushing an inconvenient husband down a well – to get on in life.  In 1862 when the novel was published (Braddon was only 27 at the time and had rattled off the final third of the book in a fortnight), the home and the woman’s peaceful and stable presence in it were sacrosanct to the Victorians.  Scary, nasty things were only supposed to lurk in haunted castles, windswept Gothic mansions, or abroad.  The thought that a woman – a wife and mother at that – could generate such horrific acts and murderous chaos was shocking indeed.  Lady Audley is presented unapologetically as just a ‘bad girl’ and – worryingly for the Victorians – there is no attempt to engage our sympathy for her by heartfelt descriptions of a sad childhood to blame it on.  Braddon was a pioneer of the Victorian ‘Sensation’ novel that specialised in people falling off cliffs, houses being set fire to, hauntings and general Oh My God moments.  The titles of some of her novels practically come with their own drumroll…. ‘To the Bitter End’, ‘Taken At the Flood’, ‘Dead Love Has Chains’.  I’m not an expert on Braddon’s life story but a few online accounts I have read  (a good one here – http://www.theguardian.com/books/2003/aug/09/featuresreviews.guardianreview14)suggest that, for her, life imitated art, if not the other way round.  ‘Crooked solicitor father’, ‘struck up a friendship in a graveyard with a man known as the ‘Don Juan of Coventry’,  ‘struck up a friendship in Yorkshire with a shadowy figure called John Gilby,’, ‘lived in sin with a married publisher’, ‘had a career on stage with the pseudonym Mary Seyton’ (was the resemblance to ‘Satan’ deliberate?), ‘mother of many illegitimate children’ are sentences that crop up in enough accounts of her story to suggest she was familiar with the boundaries she stretched in her works.  What really impresses me about Mary Elizabeth Braddon, though, is just how good a writer she was.  When I set about reading Lady Audley’s Secret last year for research, I expected something either longwinded in the Victorian why-use-three-words-when-fifty-five-will-do’ way, or, taking account of the subject matter, a breathless and hysterical melodrama.  What I didn’t expect was a perfectly polished, immaculately plotted work that would have me sailing past my bus-stop, arriving late for work and once cancelling a perfectly good evening out with friends just so I could get to the end.  How did she do it?  Of course she was remorselessly criticised and looked down on – much as chick lit authors are these days – for not being clever or literary enough, for catering too shamelessly for the masses.  Now, a hundred and fifty years later, where are these cleverer and more literary contemporaries of hers?  A great deal of them are forgotten, while Mary Elizabeth Braddon’s Lady Audley is still going strong in any number of stage plays, film versions and, of course, the book that’s never been out of print.  Did these criticisms upset her?  Did she have the time to let them upset her?  Hopefully she just shrugged her shoulders and laughed all the way to the bank.

(Incidentally, Braddon may have taken some inspiration from the real life Constance Kent murder case which occurred in 1860 and similarly shocked Victorian society with its young female murderer who was accused of disposing of the body of her young step-brother down a well.  This has a Brighton connection, which I will be exploring in a future post)

The historical geography of protests, riots and general mischief in London.

Behind the scenes with staff and volunteers