Very short notice but I’m doing a talk this afternoon at 3pm in the Duke of York’s cinema, Preston Circus on some of the women in the past who disguised themselves as men to get round the ban on women serving in the military.  Above  is Hannah Snell (1723 – 1792l), soldier and pub landlady, who served in the Battle of Pondicherry, and at one point, ended up removing a bullet from her own groin in secret rather than ask for medical attention and reveal that she was a woman.  I’ll also be talking about fearless, Irish-born Margaret Bulkley, aka Dr James Barry, who managed, in disguise, to storm two male bastions in one go, qualifying as a doctor at the University of Edinburgh, and then getting a job as an army surgeon.  Dr Barry had a successful career all over the world.  In South Africa she performed the world’s first successful caesarean that didn’t end up with the death of mother or baby.  She was one of the first doctors to use anaesthetics, stood up for slaves, was vegetarian, managed an outbreak of cholera in Malta, managed to annoy Florence Nightingale, was thanked by the Duke of Wellington and successfully kept her disguise until she died.  I’ll be talking about these and other daring, sometimes sad, but always swashbuckling stories of other women soldiers (including local heroine, Phoebe Hessel) this afternoon.

Dr Barry is on the left.  She’s accompanied by her friend, John, whom she met in Jamaica.

Here I am braving the snow in London last weekend on the trail of Brighton heroine Phoebe Hessel.  I was actually meant to be on the trail of the ‘Troxy’ where I was going to see Belle and Sebastian in a few short hours.  But then I stumbled upon Hessel Street in the back streets of Whitechapel, bells rung, and my weekend turned into a women’s history pilgrimage.

Phoebe Hessel’s story is neatly encapsulated on her gravestone standing in Brighton’s St Nicholas Churchyard: ‘In Memory of Phoebe Hessel, who was born at Stepney in the Year 1713.  She served for many Years as a private Soldier in the 5th Regt. of foot in different parts of Europe and in the Year 1745 fought under the command of tbe DUKE of CUMBERLAND at the Battle of Fontenoy where she received a Bayonet wound in the arm…

The gravestone goes on to recount that Phoebe’s life, ‘commenced in the time of Queen Anne’, extended to the reign of George IV.  That means she saw the reigns of no less than five British monarchs, and lived to the age of 108.

If living to this age isn’t impressive enough the really flabbergasting words on that gravestone are ‘soldier’, ‘served for many years’, and ‘fought’.

According to the National Army Museum’s helpful ‘Timeline of Women in the Army’  https://www.nam.ac.uk/explore/timeline-women-army ‘women have been a formal part of the army for 100 years’.  But it’s only since 2016 that they’ve ‘been able to serve in ground combat roles alongside male colleagues’.  This gives Phoebe, who served enough in ground combat roles to sustain a bayonet wound, and was understood to have embarked upon her military career aged 15, a full 288 year start!   Of course Phoebe knew that, so simply got round the problem by disguising herself as a man – a ruse she was able to pull off for 17 years, until that unfortunate bayonet wound meant she was forced to reveal a little more of her body than usual, probably giving the army surgeon something of a shock.  Another version of her story has her revealing her situation to the colonel’s wife.  Yet another version (because the story of a woman soldier who fought amongst men was so incredible it’s picked up a lot of mythology along the centuries) has her committing an offence and needing to undress to be whipped, whereupon, her body finally bared, she cried ‘strike and be damned!’  However it happened, when it was revealed that, although playing a full combative role alongside the men in the various battles and skirmishes around Gibraltar and the Caribbean, Phoebe was a member of the ‘weaker sex’, there was no option but to discharge her.  The fact that she was dismissed unpunished on full pay, though, sounds as if they were reluctant to see her go.

Stories abound as to why Phoebe made the choice, aged 15, to pull on a pair of breeches and commit herself to the dangerous, brutal and perhaps short life of a soldier.  Some sources say she fell in love with a soldier, Samuel Golding, and wanted to accompany him when he was called away to his regiment.  A less romantic explanation has her being taken along by her soldier-father when her mother died and there was no one to look after her.  Possibly, poverty played a role.  After all, the options available to a woman born in 1713 without wealth weren’t extensive.  With neither education, a career, nor a decent marriage being on the table, how long could many women hold out before having to face the choice between begging bowl or brothel?

After her discharge from the army Phoebe lived in Plymouth with her husband, one Samuel Golding.  They had nine children, all of whom died.  Moving to Brighton to marry a fisherman by the name of Thomas Hessel, Phoebe was widowed a second time.  Now aged 80, scraping a living selling fish and trinkets around town, the shadow of the workhouse lurking, Phoebe must have looked back wistfully on her days in the army.  The website eastlondonhistory.com has her ‘Clad in a brown serge dress, with a spotless white apron and a hooded black cloak, her only concession to her increasingly great age […] a stout oak walking stick‘.  But after the life Phoebe had lived, the wars she’d – literally – fought, the loss of two husbands and nine children, I don’t imagine her as slipping easily into the role of timid old lady.  Somehow, George, Prince of Wales (the later Prince Regent and George IV) in Brighton often to visit his Marine – and later ‘Royal’ Pavilion, got to know the story of the old woman pedlar who told tales of fooling the army and living the rough and tumble of military life.  Always happy to be distracted with a good story, the Prince decided to pay the formidable Phoebe a pension of half a guinea a week from 1808, thus saving her from penury.   (I wonder if he’d have made this decision if he’d known she was going to live to 108?)

Above: Pictures of Phoebe are hard to come by.  I found this tiny one in Hove Museum, possibly from a book about old Brighton characters.)

In fact, Phoebe has a second reason for going down in Brighton folklore.  One evening, the story goes, there she was in the Old Red Lion (a pub that still exists) in nearby Shoreham-by-Sea and overheard a conversation that revealed one of the participants to be none other than Samuel Rooke, a notorious highwayman who’d been terrorising the roads around Brighton for many years.  Phoebe’s testimony lead to the capturing of Rooke and his accomplice and their subsequent hanging in Hangleton Bottom.  A grisly end to Rooke but a relief to the people of Brighton and another reason for the town to hold this amazing woman to their hearts.  No wonder, she was invited to attend the town’s celebrations of the coronation of King George IV in 1820 at the grand old age of 107.

Phoebe’s story is so fantastic that these days we could be forgiven for wondering exactly how much of it’s true.  Were her tales of derring-do just the fabrications of a good saleswoman who wanted to lure more customers?  Did she really live to the age of 108?  How did she manage to have a military career for 17 years without anyone noticing she was a woman?

Well, the Northumberland Fusiliers, successors to the 5th Regiment of Foot, obviously saw enough truth in her story to restore her grave in St Nicholas Churchyard in the 1970s.   As did London Borough of Tower Hamlets, who commemorated their famous daughter with not one but two streets in her honour. 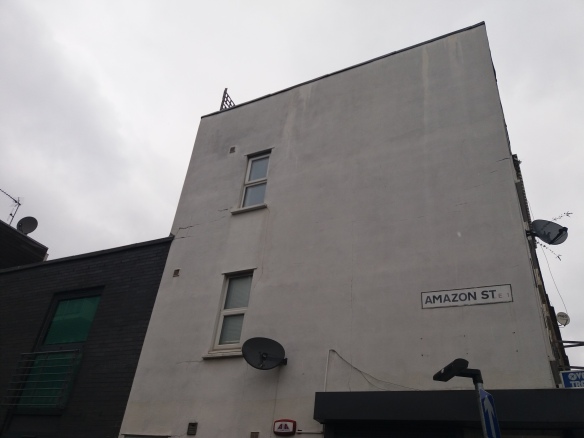 (Above: Amazon Street at the end of Hessel Street in the Borough of Tower Hamlets, London.  Phoebe Hessel was also known as ‘the Amazon of Stepney’).

Me, I think if only half of Phoebe’s story is true, then it’s incredible enough to make her a true Brighton heroine.

A great article to read about Phoebe Hessel is here:  http://eastlondonhistory.com/2010/11/18/phoebe-hessel-amazon-of-stepney/

Phoebe was far from being alone in dressing as a man to have a military career.  The lives of Hannah Snell (http://www.hannahsnell.com/) and Dr James Barry,  who made a  double pronged attack on professional bastions excluded to women by qualifying as a doctor as well as being a soldier. (https://en.wikipedia.org/wiki/James_Barry_%28surgeon%29)

I will be talking about Phoebe Hessel throughout May on my Notorious Women of Brighton walking tours that start near her grave in St Nicholas Churchyard, Brighton.  See Talks/Walks section for details.

The geography of resistance, both past and present, in the British Isles (formerly Turbulent London)

for Teenagers and Adults