I wasn’t thinking much about historical women as I stumbled – literally, thanks to the icy wind and having just walked through a field of horses (I have a history of being chased by animals in fields while out walking, but that’s another story) – into St Wulfran’s Church at Ovingdean yesterday.  This early Norman church on the rural fringes of Brighton is a real gem.  Tucked away in one of the folds of the Downs, it has a gorgeous 1867 Arts and Crafts inspired ceiling by Charles Eamer Kempe, some beautiful stained glass and, thanks to posters advertising children’s groups, meetings and a stack of coffee mugs, the feel of a place that, despite being almost a thousand years old, plays a lively part in the community.   Picking up one of the leaflets provided for passers-by, I was intrigued to find that one of the most trailblazing women to be associated with Brighton – if not, of the twentieth century – is buried in the churchyard.

This is Helena Normanton (1882 – 1957), the first woman to practise as a barrister in England and the second, in 1922 to be called to the Bar in England and Wales.   Her list of firsts doesn’t end there:  Helena Normanton became the first woman to obtain a divorce for a client, the first woman, in 1948, to lead the prosecution in a murder trial, the first woman to conduct a trial in the USA , and the first woman to represent cases at the High Court and the Old Bailey.   According to Judith Bourne, Senior Lecturer in Law at London Metropolitan University (http://www.edgehill.ac.uk/news/2011/02/the-legacy-of-helena-normanton/) “she left behind a legacy…In a way she was a social experiment and bore the brunt of discrimination for everyone else. A pioneer who fought against a lot of prejudice, she was the one who made it possible for women to enter the legal profession.”

Here’s yet another first… These days not many people blink an eye when a married woman chooses to keep her own surname.  But in 1924 the married Helena Normanton attracted considerable interest – and disapproval, no doubt – when she became the first married woman to be granted a passport in her maiden name. 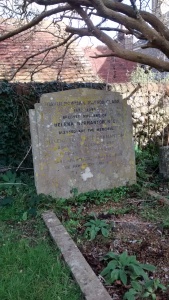 Helena Normanton’s early life perhaps prepared her for the struggles to come.  At the age of four, her father having been found dead in a railway tunnel, she moved from London to Brighton with her mother and younger sister to run a grocery shop and then a boarding house in Clifton Place.  In 1896 she won a scholarship to York Place Science School, forerunner of Varndean School for Girls, but on the death of her mother only four years later, had to leave to look after her sister and help run the business.  1901 sees her moving to Hove, to live at a boarding-house in Hampton Place run by her aunt. In 1903 she was able to resume her studies and went to the Edge Hill Teachers’ Training College in Liverpool, subsequently teaching history in Glasgow and London before applying to become a student at Middle Temple in 1918.  Initially she was refused, and lodged a petition with the House of Lords, only being admitted in 1919 after her reapplication within hours of the Sex Disqualification (Removal) Act 1919.

As probably expected from a woman who was making such bold raids into male territory, Helena wasn’t an armchair supporter of women’s rights.  She joined the Women’s Social and Political Union (WSPU), and was part of the 70 women who, disenchanted with the leadership of the Pankhursts broke away to form the Women’s Freedom League.  She supporting the campaign of the Women’s Peace Council for a negotiated peace during the First World War and was an early member of CND.

Equality of pay was another issue close to her heart.  Despite having a successful legal career, she had to supplement her income by letting out rooms in her house and writing for newspapers and magazines to make ends meet.   She had lived through the First World War and seen women becoming the main breadwinners.  As early as 1914 she asked in a pamphlet ‘Sex Differentiation in Salary’ ‘Should women be paid according to their sex or their work?’ I wonder what she’d think if she knew that almost 60 years after her death, this issue that she described in such black and white terms should still be something that many women are fighting for.

Helena Normanton also campaigned for women’s rights within marriage.  She believed that, once married, men and women should be seen equally and in the 1930s campaigned for changes in the matrimonial law to allow married men and women to keep their money and property separately.  In 1938, despite hostility from the Mothers’ Union, she co-founded with Vera Brittain, Edith Summerskill and Helen Nutting, the Married Women’s Association in 1938.

On the website http://www.first100years.org.uk/ which explores the ‘journey of women in the legal profession over the last 100 years’ Kitty Piper writes ‘As one scholar puts it, Normanton should be to women lawyers what Neil Armstrong is to astronauts, and this is no exaggeration.’

Sharp-eyed, women’s history savvy visitors to St Wufran’s may also notice that the churchyard houses the family tomb of another pioneering woman with local connections, Sophia Jex-Blake (1840 – 1912), below, was one of the first female doctors in Britain.  I talk about Sophia on my Notorious Women of Kemptown Walk.  The tomb belongs to her family, Sophia Jex-Blake herself, was buried at Rotherfield alongside her partner, Margaret Todd. 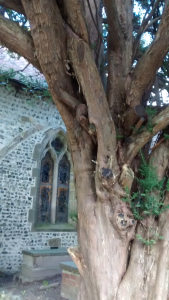 A thousand year old tree at the entrance to St Wulfran’s Church, Ovingdean

The historical geography of protests, riots and general mischief in London.

Behind the scenes with staff and volunteers

with yoga for Teenagers and Adults